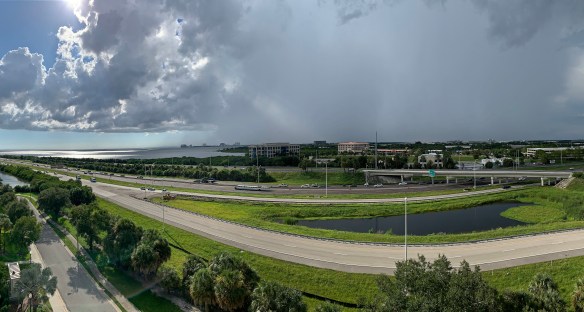 Heading home after work, I stopped at an office parking deck after I got over the bridge into Tampa. Storms were moving in over the area. I could see it raining on one side of the bridge and sunny on the other side. Typical Florida weather.

Driving into my neighborhood, it had just stopped raining and the sun was peeking out.

A rainbow in front of my house. 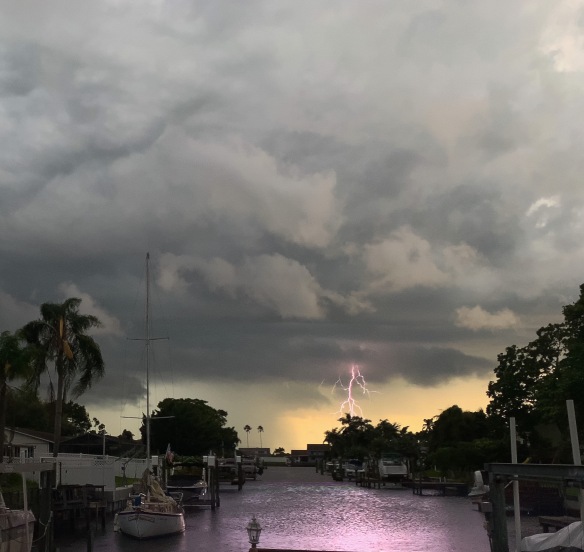 Later that week, we had other storms coming across our neighborhood. I was able to catch the lightning in the backyard with my phone. 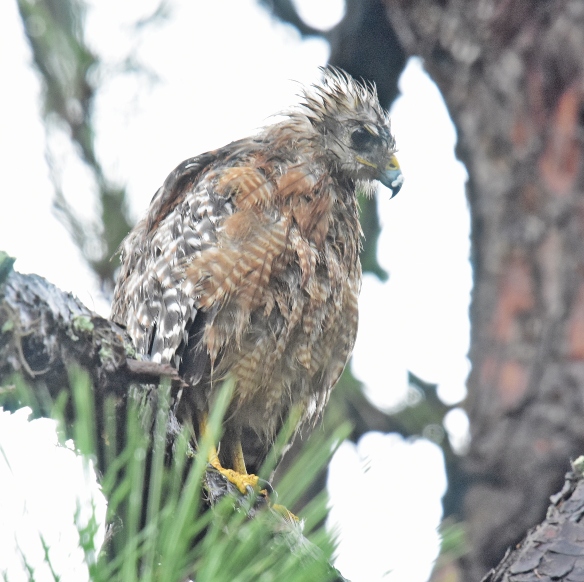 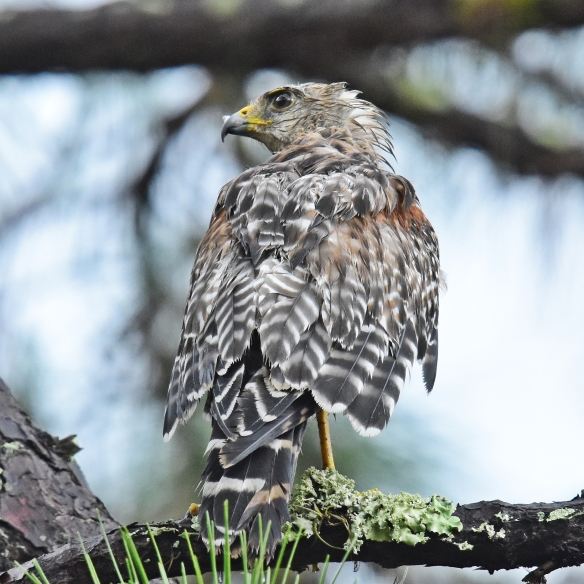 I left work while it was still raining in early August hoping Chesnut Park would be empty of people due to the weather. That’s when the baby deer come out from hiding in the woods. Early on Saturday mornings when I’m usually there, the park is filled with joggers, walkers and dogs so the deer stay deep in the woods. It was still drizzling when I first got there. I quickly saw 2 hawks that were soaked. 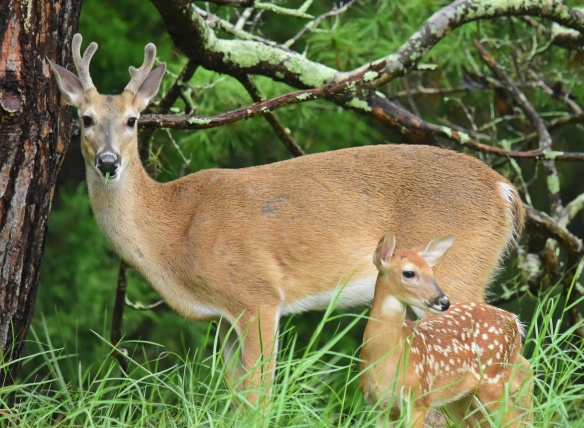 I spotted a fawn staying close to the family. 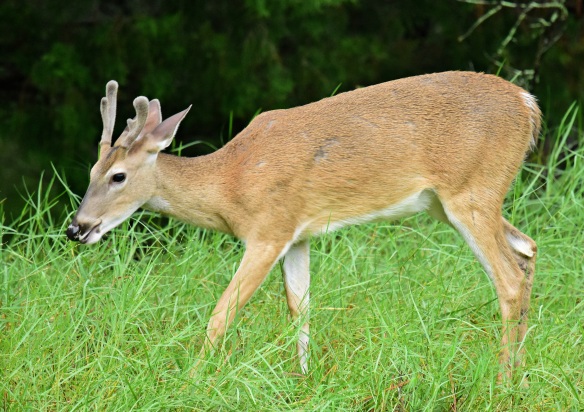 Not sure if this was Dad or a big brother. It’s rare to see older males at the park. They usually stay farther north and come down to the park during mating season. 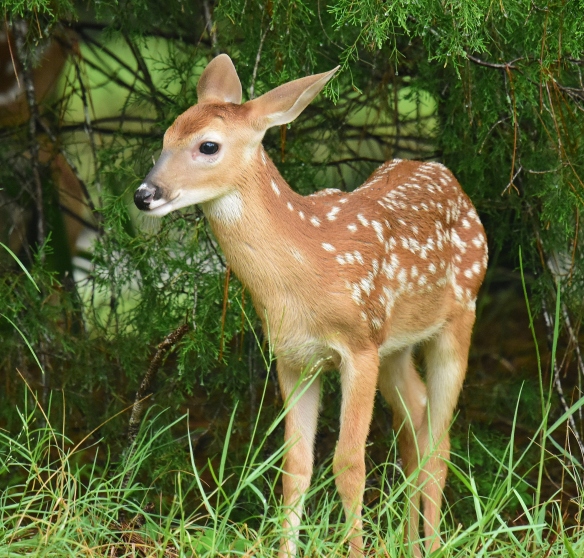 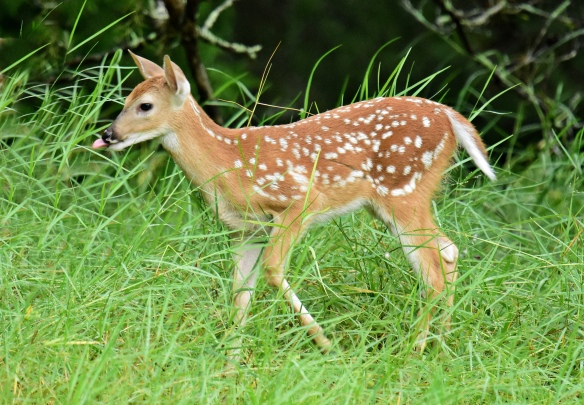 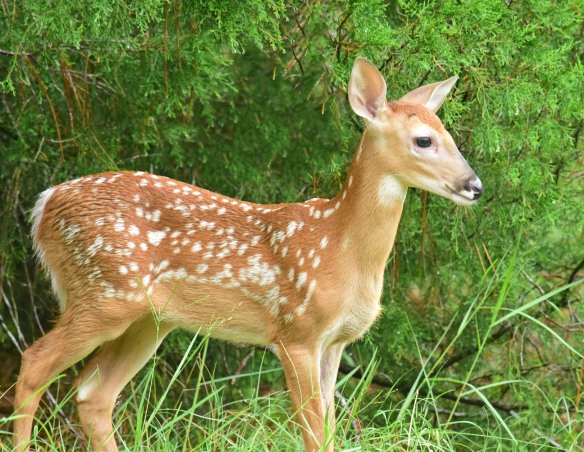 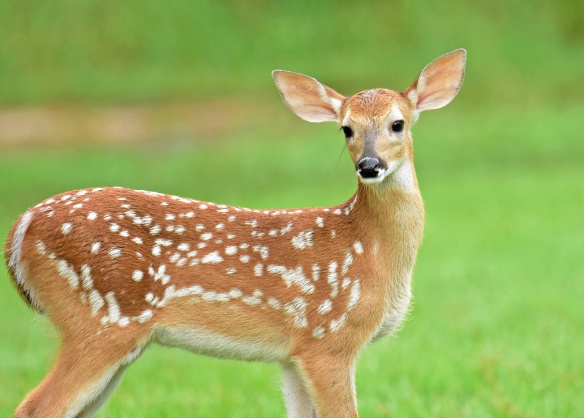 This little one had a sibling. Even though the rain had stopped, I stayed in the car to take these. I didn’t want to spook them. They continued to graze and I eventually headed home. 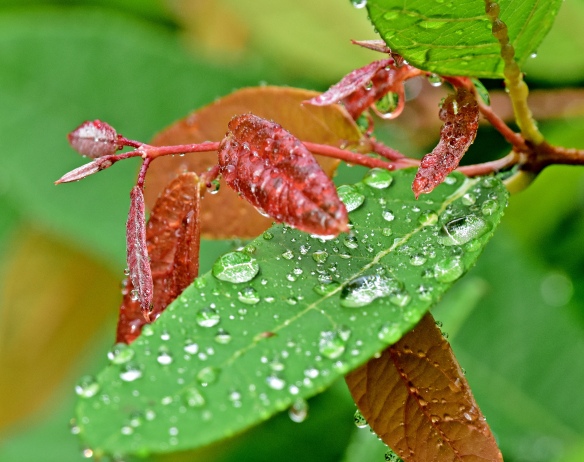 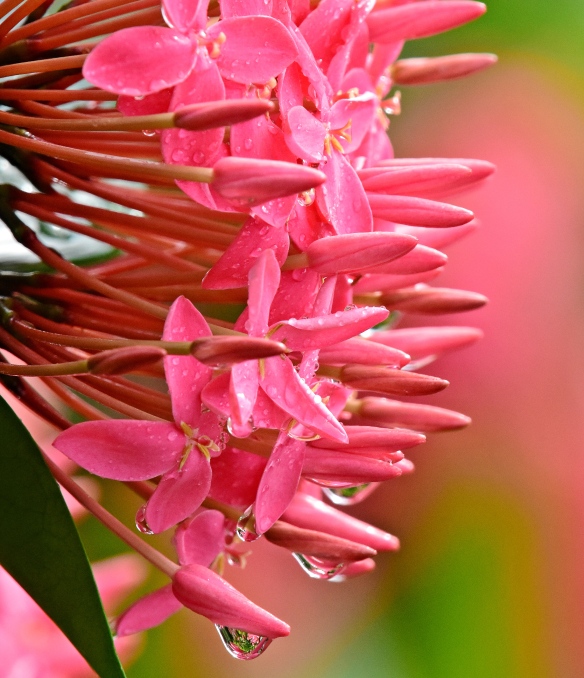 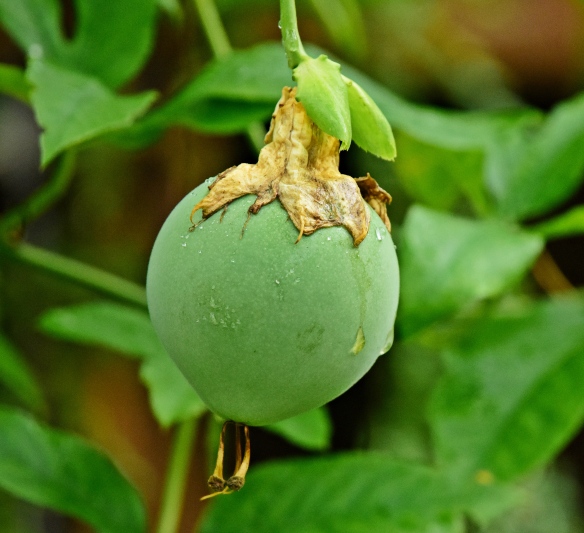 Pictures from a walk around the Florida Botanical Gardens in Largo during a morning summer rain shower. Most people say the rain never lasts long in Florida in the summer but sometimes they last most of the day. This morning in August it rained all day. At least it wasn’t hot.

Standing under the gazebos looking across the pond.

Linking to Wednesday Around the World. 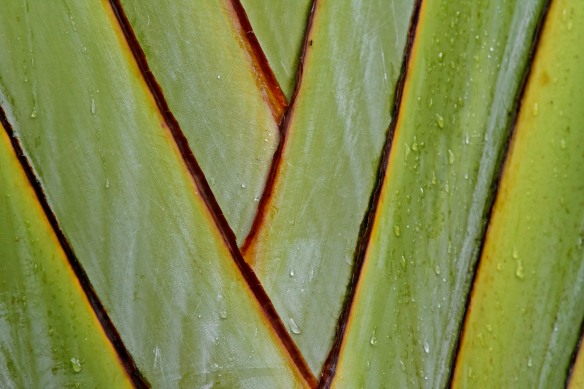 I headed out to the Florida Botanical Gardens in Largo in early August around 8am. There wasn’t a cloud in the sky in Tampa. As I got closer to the gardens I could see the dark clouds up ahead. I was thinking it would be a quick rain shower and then it would nice and cool to walk around after the rain. I sat in my car for over 30 minutes in the down pour. It finally slowed down to a drizzle. I got out of the car with my big golf umbrella and walked around the gardens taking pictures in the drizzle. At least it wasn’t hot.

On vacation in Sanibel Island.  On our first night I walked out of our room and walked the 20 feet to the beach.  The above was the view. 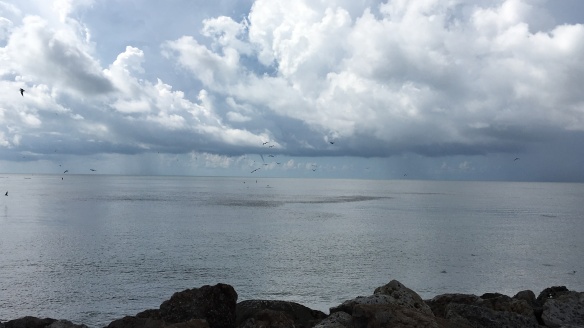 One day before lunch, we were watching a storm roll in. This was the only rain we saw during our 5 day stay,  way off in the gulf.

Moon going down one morning. 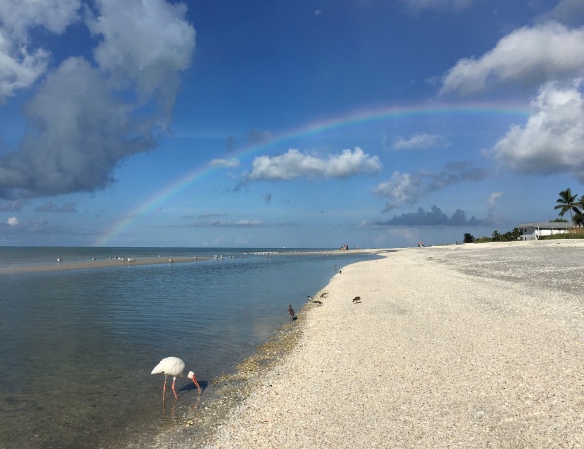 An early walk on the beach produced the above. 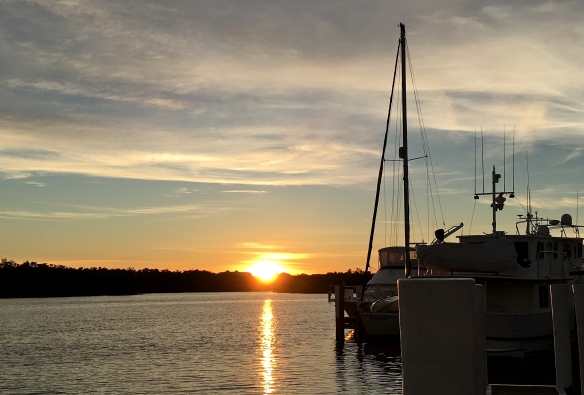 On our last night, we had dinner at a restaurant near a marina and watched the sun go down. It was a beautiful drive back to our hotel.

We did a staycation in late September and drove 2 hours south of Tampa and stayed right on the beach in Sanibel Island. Tourist season was over and it was very calm and quiet. It was nice just to relax and hang out on the beach for several days.  I took tons of pictures (I can only relax so much) so I’ll be boring you with my “What I did on my summer vacation” pictures coming up. I did bring my Nikon camera and several lenses but all of the above were taken with my Iphone.

I walked out the grocery store and saw this. Of course, no one was running for cover. Everyone was taking pictures of it with their phone cameras. I joined in. I stopped by the grocery store after work on the Monday after the 4th of July. I usually go later in the week but since we had been out of town for the last week we really needed stuff.  It was just a water spout, not a full blown tornado, that had come onto land from the bay which was about a mile away. There had been several water spouts seen in the Tampa Bay area in the last month so no one was completely surprised to see this one.  It hung in the same spot for a few minutes then started to fall apart. 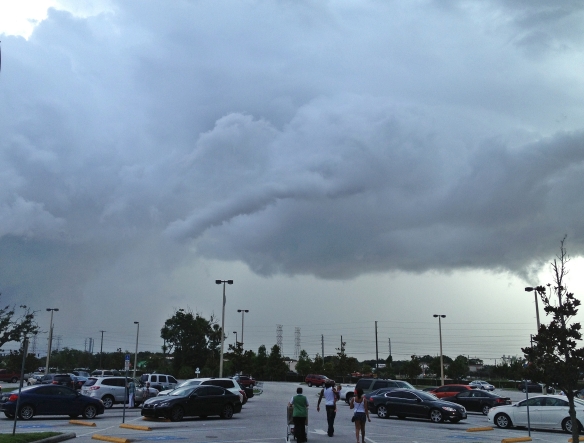 You can see it starting to fall apart at the bottom. People were heading to their cars at this point. This was my first water spout sighting so it was pretty cool even though I was ready to make a run for the meat locker if it started to move towards us.

Clouds moving in around the Sunshine Skyway bridge area. It was a rainy Sunday afternoon so I headed to the outlet mall south of Tampa.

You could see where it was raining on the right side of the bay.

Coming home from the outlet mall.

Rain to the left of the Sunshine Skyway bridge.

It felt like it rained every day in July. Almost every day anyway. I kept missing great storms for one reason or another. Stuck at work mostly. All of the above were taken with my Iphone. I’m getting hooked on using the panorama feature.