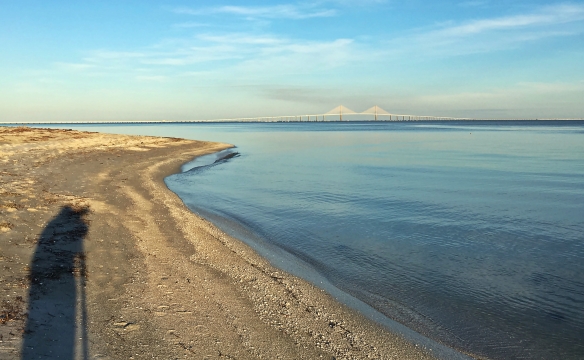 Shots from the east beach turnaround looking at the Sunshine Skyway Bridge. The sun was just starting to set. 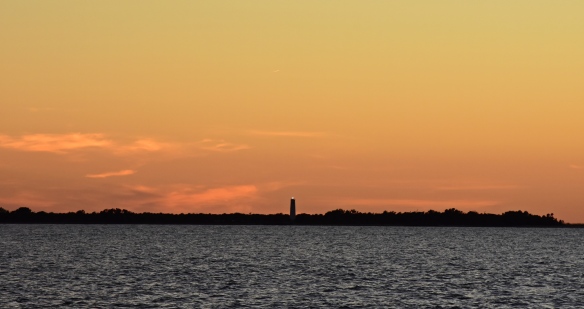 After the sun goes down at Fort Desoto Park.

These beautiful loons only stay in Florida for a few short months during the winter. 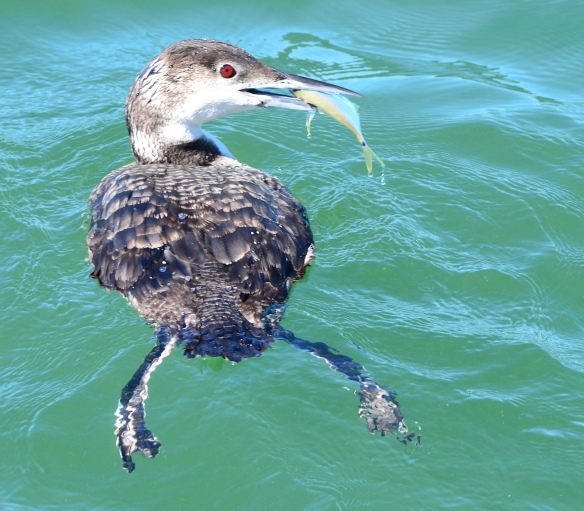 I caught one busy getting his own fish. 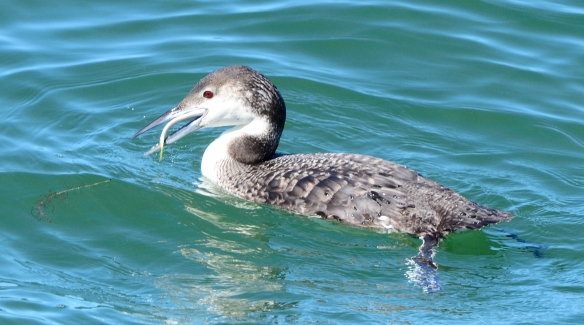 He was gulping them down, one after another. Then the below happened. 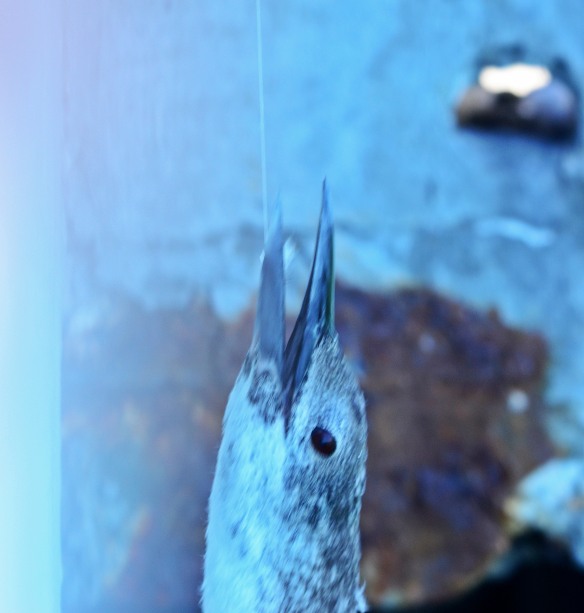 A loon had gotten caught in fishing hook and the fisherman was pulling him up on the pier. At least the fisherman next to him had told him not to cut the line, to pull him up and get the hook out. It’s better to use a bait net but they pulled him so fast no one had time to get the net. I ran over to the corner and shot the above quick right before he came up on the pier. 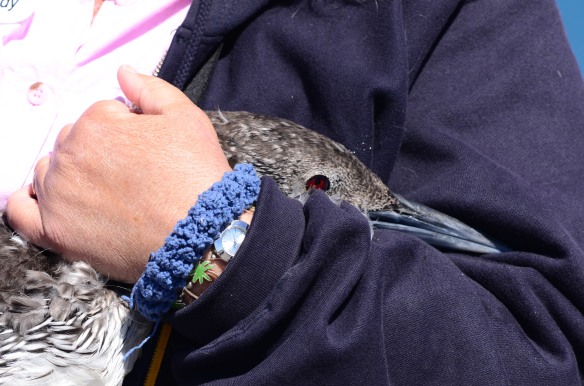 A volunteer from the Tampa Audubon was there and helped get the hook out. The hook came out quick and the loon was released back into the water. 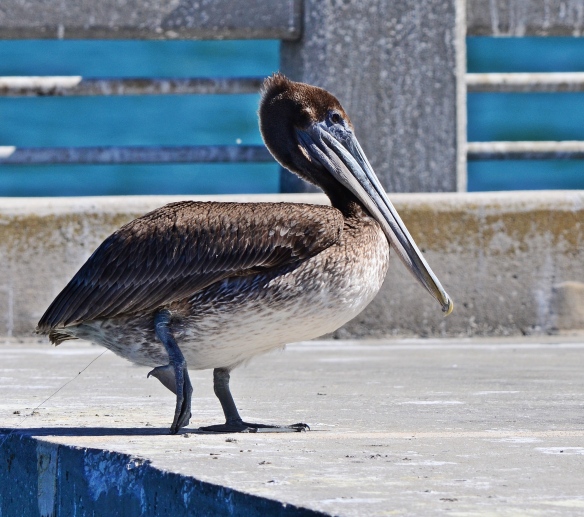 This pelican was not so fortunate. He has fishing line stuck somewhere on his body. He was on the other side of the pier that is not accessible.

A few other sights on the pier that morning. And we wonder why they just cut the line instead of pulling up the bird. They can’t even bother to pull up their own pants.

If you missed the story the Tampa Bay Times posted on this issue that I attached in my last post, here is the link again. This not new news. I found this article from 2010 about the same subject. 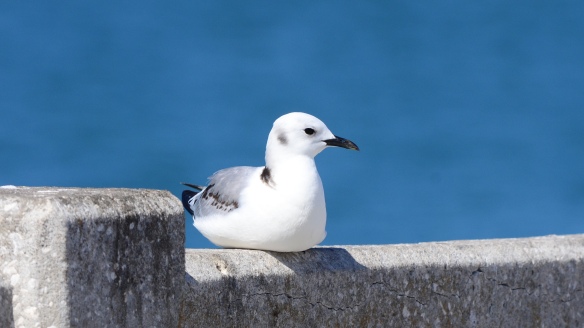 My 2nd trip to the Sunshine Skyway fishing pier to look for the rare kittiwake was successful. I parked my car near the end of the pier (you can drive on this pier since it used to be the old bridge) and got out of my car thinking I was going to spend hours looking at every bird flying by for it. Well, it was sitting right outside my car. I took this from my car window. 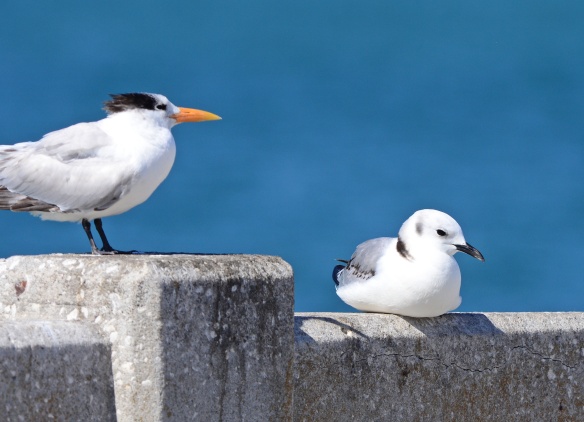 He had a friend, the royal tern, standing next to him. 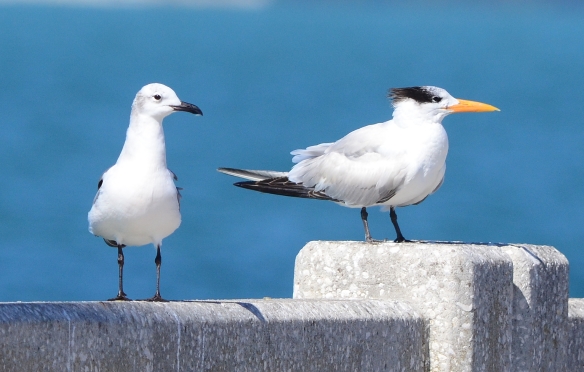 Many birds were on the pier even though it was a windy cold morning.

After watching him for a few minutes, he stood up. By now several other photogs were standing there taking his picture. 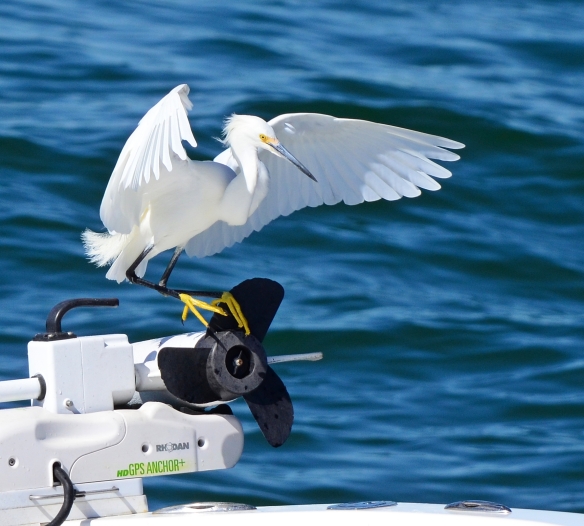 Snowy egrets were hitching a ride on a fishing boat. 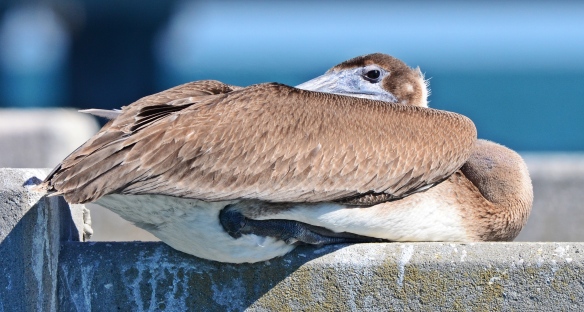 The rare kittiwake sighting in central Florida comes at a price. Because the two birds (yes, there were two at first) picked a busy fishing pier, one of them got caught in a fish hook and sinker and died about a week after they arrived. A birder happened to be on the pier and saw the rare birds and posted it on a bird forum. Hoards of birders came from all over the state to see the birds. Several people saw the bird swallow the sinker and get hooked and posted the event on the bird forum. Not to mention all of the hooked pelicans, loons, gulls and terns that they saw. Because the Suncoast Seabird Sanctuary is not taking in injured birds  due to financial issues, they did not respond to the numerous phone calls they got. A new bird rescue group  is starting up and hopefully they will be able to help save many of the injured birds there. More on injured loons later.

An article about the recent kittiwake death and all of the injured birds at fishing pier from The Tampa Bay Times can be found here.

Brown pelican taking off in front of the bridge. 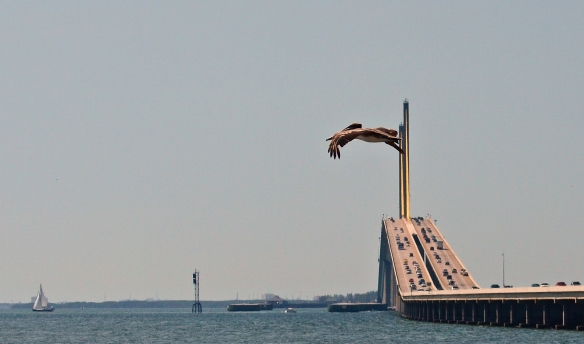 Pelican flying by in front of the bridge. 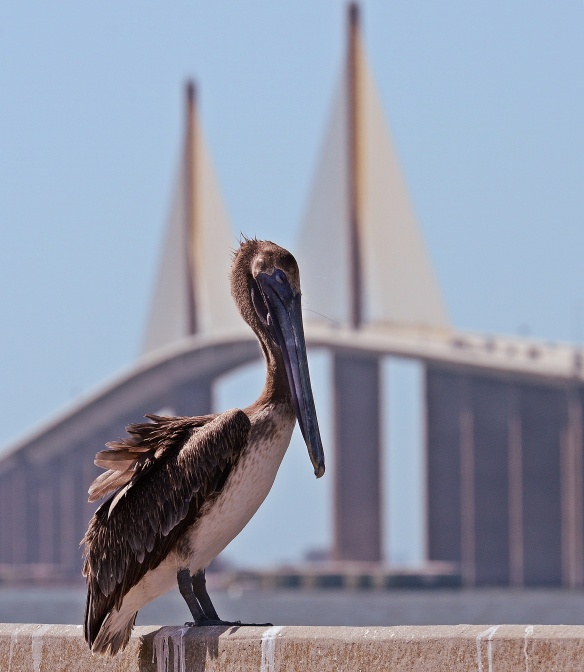 Posing (I think he was trying to sleep standing up). 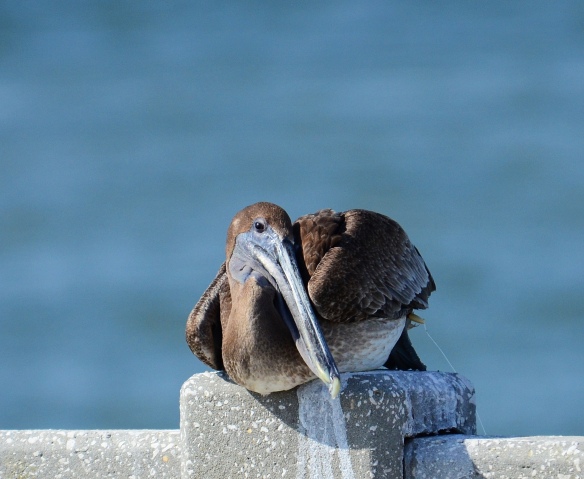 Taking a break. This one has a bluer bill than most. With that brown head, I wonder if this is a juvenile. As I was editing this, I noticed the fishing wire hanging off his foot in the back right side of the picture.

Not sure what happened to this bird. Looks like a nasty scrape. Will the salt water help that heal? 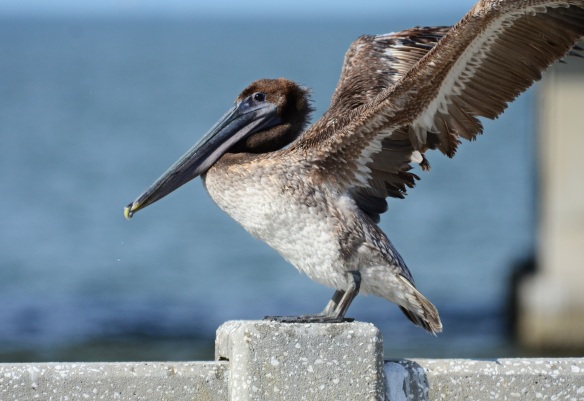 It’s a hard knock life for a pelican that hangs out at a fishing pier. They were diving around getting lots of bait fish and many were waiting by the fishermen hoping for a handout. The risk of getting a fishing hook or getting tangled up in fishing wire is great here. It was a quiet afternoon when I was there but normally, on the weekends, the pier is lined up with fishing poles. There was already one pelican being picked up by someone to take to the bird sanctuary in a crate when I got there. I’ve heard there are volunteers from the sanctuary that walk the pier on the weekends looking for hooked birds. There are signs all over the pier on how to catch and unhook a bird but most people don’t bother and just cut the line based on number of birds that get taken to the sanctuary each year. Maybe we should ban fishing from fishing piers. Then just call them bird  piers. I’m sure that will go over really well.