Pulling into my driveway one Saturday afternoon I saw an osprey on my neighbor’s dead palm tree. I ran out the side door with my camera and the osprey was was looking at me like “Don’t steal my fish.”  I stood in the door frame to take these. I was afraid he would fly off but he didn’t. Just kept eating his fish. 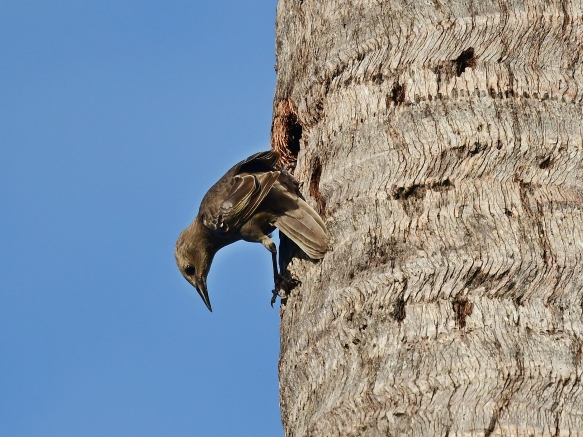 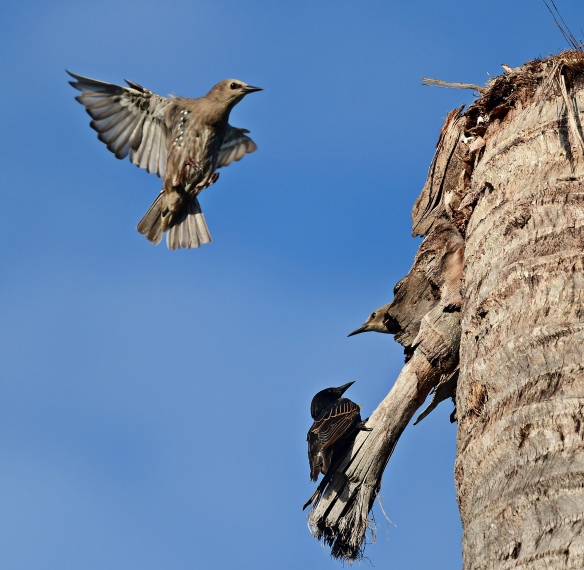 Later in the afternoon I saw some juvenile starlings hanging around the same palm tree. I’m assuming these were the ones that were born in the nest in the same tree. They were there for a few hours that afternoon and then gone.  Since then, the dead palm tree was removed. Luckily the neighbor’s waited until the babies were gone. I miss looking out of the kitchen window to see what was on the tree but the tree could have been a hazard if a storm or hurricane came through.

Looking out the side bedroom window, a squirrel was taking a nap on my neighbor’s screened porch. Not a smart move for a squirrel. Too many hawks in the area that could fly by and grab him.

On a Saturday morning in February, I walked out on beach trail and saw this massive osprey nest above. It must have been here for years but on this particular morning, I noticed how much bigger it had gotten. Maybe it was sinking in and the osprey kept adding to it. On Sunday, someone had posted on the Facebook Fort Desoto site that the nest had completely collapsed and fallen to the ground. The osprey couple did not let this get the best of them. They spent an entire week bringing sticks back to the nest, starting from scratch. They were seen all over the area bringing sticks back (although if they were that smart they would just fly down to the ground underneath the tree and bring the same sticks back up). The next Saturday morning I went back out on the beach and saw the below.  The birds had already built a pretty good size nest. 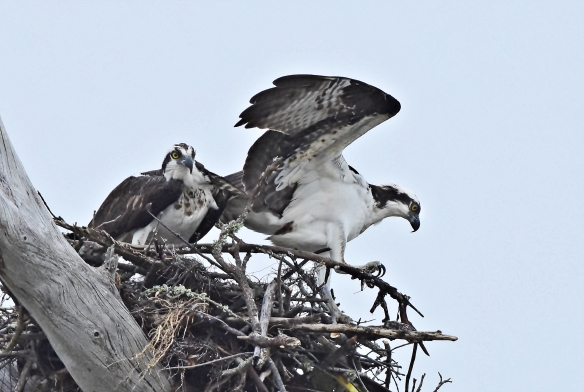 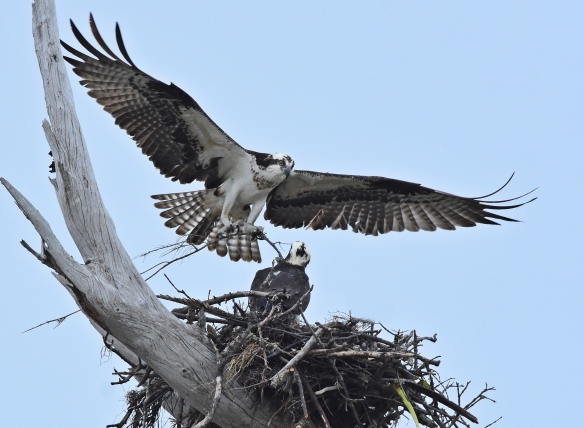 Even a week later, they were still flying in with sticks. They didn’t want to waste anymore time. As I was leaving and heading back to the parking lot, I took one last glance back and saw they were mating. 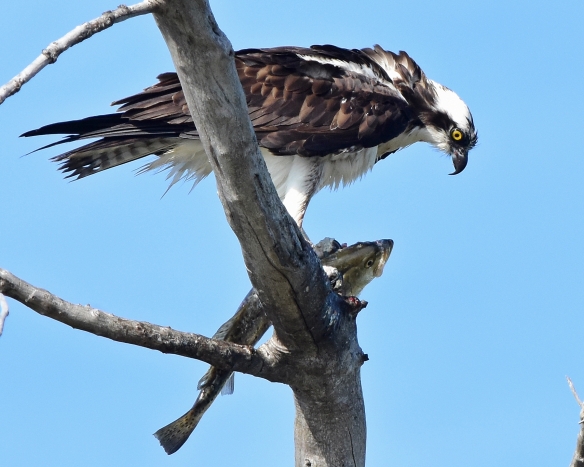 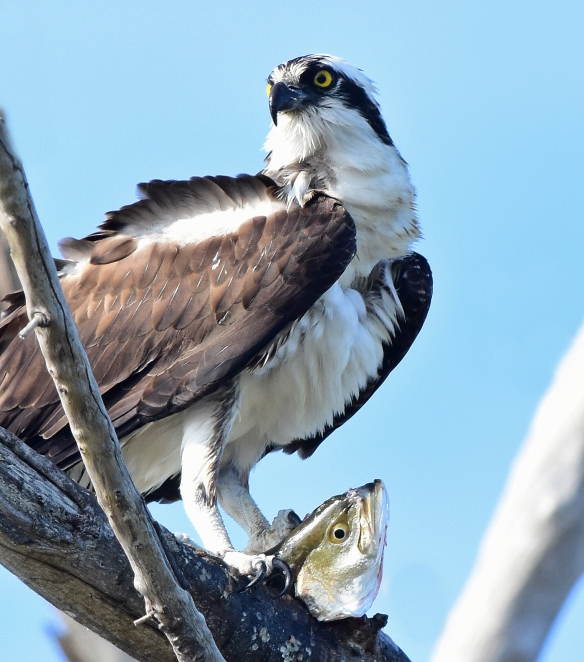 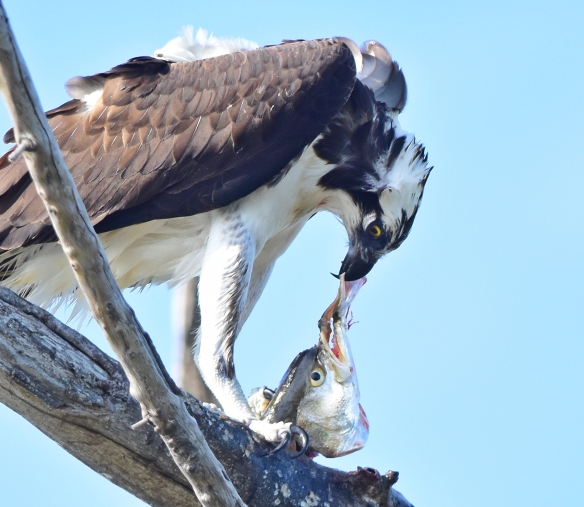 Farther down the trail, this guy was just starting breakfast and didn’t seem to mind me standing on the trail watching him eat.

There were not many birds on the beach near the pier.  A few laughing gulls and this lone black bellied plover.

Looks like this is a couple of laughing gulls flirting.

The rare hybrid great blue heron/great egret made an appearance at the pier. 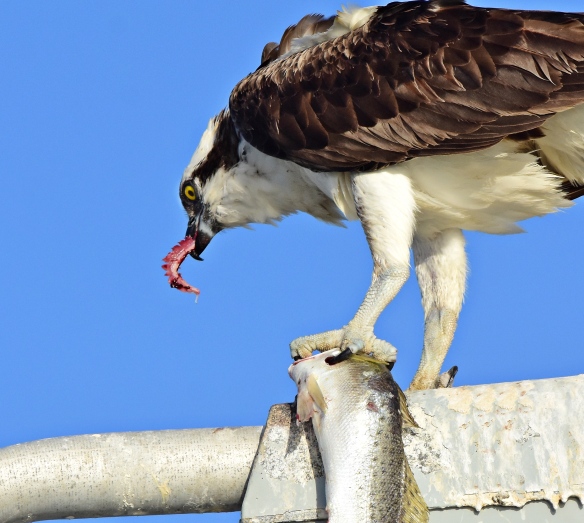 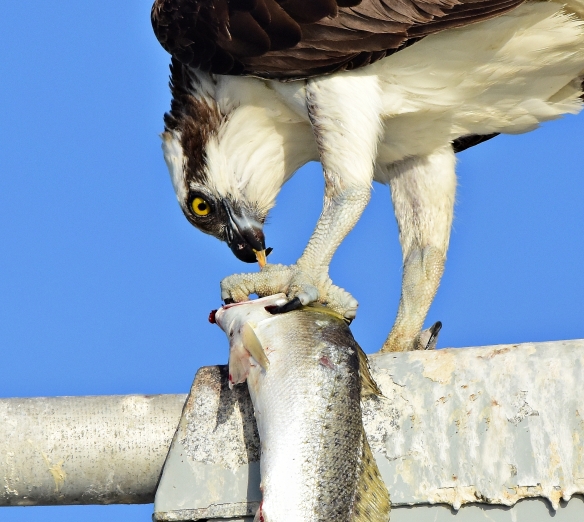 This osprey was eating some yummy fish on the light post on the pier.

Another osprey was also eating.  These osprey have been hanging out on the pier a lot lately. They are not skittish and don’t fly away as tons of people are walking by just below them.

It’s been a beautiful afternoon but I was hungry and had a 45 minute drive home so I left to get some dinner.

The eagles are back at Honeymoon Island. I only saw one the morning in early December but the other one could have been laying so far into the nest that I couldn’t see her. Last year they got a late start and both babies died when they were almost fully grown. The team at Project Eagle Watch had them sent for a necropsy but I never did hear what happened or if they know what caused it.

Looking around. The end of the trail where the nest is located is blocked off so these are highly cropped.

The above juvenile eagle was sitting on an old osprey nest eating something.

Before I left the park, I stopped by the nature center on the way out to see what was going on behind it. Sometimes there are ducks floating around in the lagoon. I noticed something way out on an oyster bed that was exposed due to low tide and snapped. When I got home and cropped this up I realized it was juvenile eagle. I’m thinking he was a little older than the one above since he’s starting to get his white feathers. Bald eagles don’t get their full head of white until around 5 years old.

Osprey fly over. They were everywhere on the nature trail.

This one looks like he’s got a blowfish or a puffer fish.

He poked it a couple of times and then dropped it and flew off.

Another one with a striped fish. They were all eating breakfast.

I caught this one with his beak full.

This one was chilling. Hanging over the parking lot watching everyone walk by as I was leaving.

Another one was sitting even closer. This one is a female since she has those brown spots across the chest. Look at those talons!

I hadn’t been out to Honeymoon Island since May. I decided to head out and walk the nature trail and then walk the beach area. Osprey were everywhere. Sitting on the trail, flying all around, eating fish. It was an osprey convention. They were all yelling at each other so it was loud. I found one of the eagles sitting on a branch over the nest. We’re hoping for a better year with the babies.  No sign of the great horned owls but they could have been hiding.