His mate wanted a handout as well.

A wet brown thrasher hiding in the bushes.

A carolina chickadee high up in the trees. I could not get a good shot of this guy.

A male common yellowthroat high up in the trees. 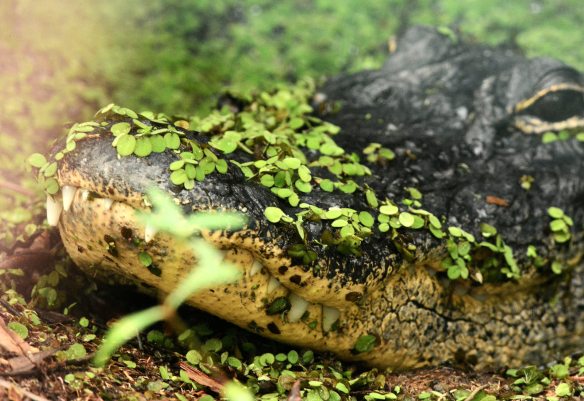 Mom alligator still guarding her nest. I thought it had been close to 2 months since I had seen the alligator nest mound she was resting on. Still no babies on this trip. The area is fenced off so I took this in between. She’s got some nice teeth.

Turtle hanging out near the alligator’s nest.

I saw this beautiful dog walking with his owner and had to take a picture.

Another quiet morning at Chesnut Park. There were a few migrating birds showing up but most stayed high up in the trees. I’m having a hard time seeing many of the fall migrating birds this season. It always rains during the week when the birds stop by for a rest and I can’t get out of work. By the sunny weekend, they all have heading on their way south for the winter.

Cool dog at the park. Beauty or beast?  You decide.

Bambi near the parking lot. 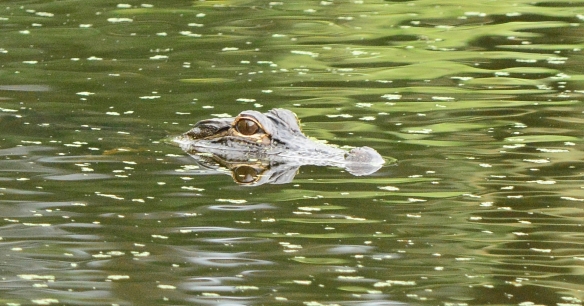 Tiny one swimming by.

The spider was eating a bee.

After walking around Chesnut Park for two hours, I was thinking I was not going to have a deer sighting on this trip. I was almost out of the park when something caught my eye. I turned around and pulled off on the grass. I got out for a few minutes and watch a mom and her baby walking by. Perfect ending to a hot morning.

I had heard there were hundreds of black terns on Gandy beach in early August. By the time I made it over there in late August, there were only a handful still hanging around. Most had lost their all black feathers and were molting into some form of mix of black and white. The above was already in his winter feathers.

You don’t realize how small they are until you see them next to a royal tern. Both little ones on the left and right are black terns in the middle of molting. 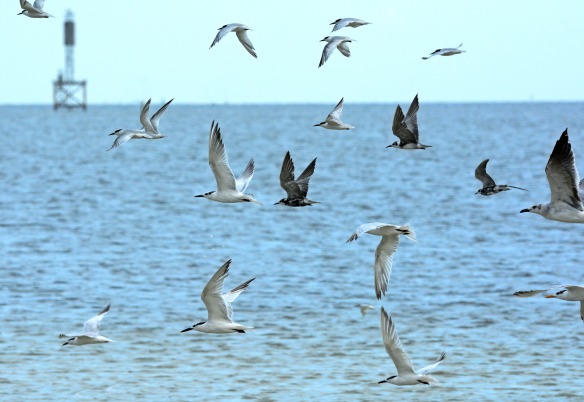 Something spooked them and off they went. They circled around and came back to the beach.

Was he showing off or clowning around?

Bye bye. Down below is the reason the terns took off. This time they flew far away to the roped off area at the end of the beach.

This guy thought it was funny to have his dog chasing after the birds. Since they were in the main beach area I didn’t say anything. All of the birds flew over to the sanctuary. I took these from the car. Although it was sunny here on this side of the beach, across the street were dark clouds and I could see lightning headed this way. I was disappointed there was no rainbow.

I couldn’t blame the dog for wanting to run around and have fun. He was cute.

Looking down towards the utility tower. The yellow on the left was a concrete wall so people couldn’t drive past that spot. There are also big signs that say keep out, bird sanctuary but many people don’t pay attention.

I stopped off at the beach on the way home from work to see if any black terns were still there. They migrate through in late summer and stay for a while. It started out sunny when I left work but right after I got to the beach, a nasty storm was heading for me quickly. I snapped a handful of pictures and left.